Today will be a second look at gardening in small spaces.  I'll have an emphasis on in between crops and what to grow during the fall and winter. Click on the links to take you to the documents.

What Size Pot?
In Between Crops or Catch Crops
Renne's Garden is a great resource for seeds, and I find they work well for gardens in the Santa Cruz and Monterey areas. Below is a link to her When to Plant Guide:
http://www.reneesgarden.com/hm-gardnr/resource/whentoplant.pdf

Posted by CoastalCAGardener at 9:41 AM No comments:

I'm experimenting with a new plant - Solanum muricatum. I picked it up at the Cabrillo plant sale (along with many others). I transplanted it into the greenhouse on 17 June 2012. A couple of fruit had set, but I felt it wasn't thriving in the cool foggy breezes. 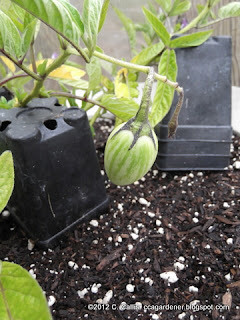 Now it's looking quite lush and the fruit that is in the above picture is now about 1-inch longer. It's also putting out another flush of flowers.

I was thinking I should call the greenhouse "Nightshade House" as that seems to be it's main purpose. Tomatoes are big (I'm growing German Strawberry) but there are only 2 fruits - and they are both on the same plant, further away from the door in the greenhouse. The fog has been keeping the nights too cold and I'm having blossom drop like crazy.  I guess I won't have to worry about fitting canning into my schedule.
Posted by CoastalCAGardener at 6:54 AM No comments: 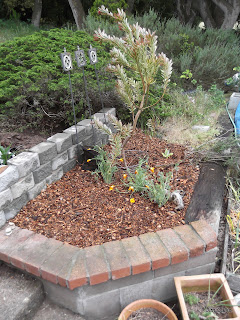 What startles me most about gardening and plants is what survives. My poor neglected garden still hangs on. I spent last weekend poking through the empty pots and tall weeds to see what I could find.I was astounded to see my comfrey poking up young leaves. One of my lavenders (I think it's a Lavendula stoechas) has seeded itself in funny little niches here and there. Native irises are blooming as well as the heucheras. Native plants are tough as nails, thankfully. I'm also thankful for the tough herb plants. I'm resigned to the fact that I lost the stevia, but glad to see the hyssop sending up young shoots.

Pictured above is my re-configured front bed. My husband pulled out the last of the dying lavender. And as much as I hated to see it go, I got to rework this little corner and I'm pretty happy with the change. The blank spot will get some re-located Lavendula stoechas seedlings.

Luckily for me the bones are there, I just need to do lots of cleanup.

Posted by CoastalCAGardener at 1:06 PM No comments:

I spent my Sunday harvesting some of the worm bins. Fun work especially when you have multiple 5-gallon buckets to add to the garden. But not very picturesque. Garden is a little bedraggled - I'm just getting ready for the winter rains, poking in seeds that I know will thrive in the wet and cold.

So even though I don't have pictures, I'd like to share an amazing video from my favorite local resource.

I love the Central Coast.
Posted by CoastalCAGardener at 8:48 AM 1 comment:

Here's a happy little ritual I've noticed! Here are the flowers now blooming in my garden.
I'll start with the weeds:


I've been attending a Herbal Medicines seminar and I now have a greater appreciation for thistles (although I'm still likely to take the string trimmer to them).

And these were a surprise: 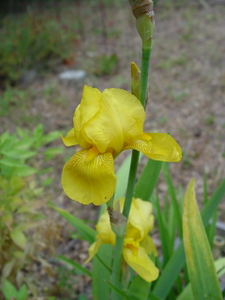 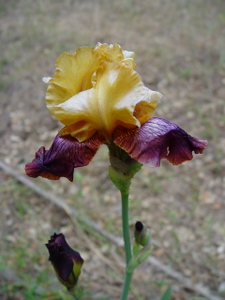 My friend Ann gave them to me and this is the first time they've bloomed. Her garden is filled with irises at this time of year. She has better luck with them.
Posted by CoastalCAGardener at 12:01 AM 2 comments: 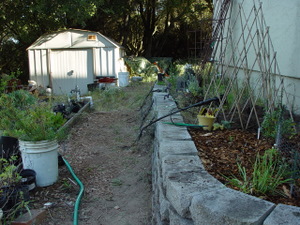 It's not the prettiest picture. But I've been spending time re-working the bed next to the south side of the house. The reason for the change? Gophers. They finally found a way through the wire somewhere and devoured nearly everything in the bed. (Here's the first post where I made the bed originally and the second post where it's completed.) Now I'm happy to say that it lasted a long time, and perhaps if I didn't have school occupying much of my time, I could have stopped the invasion. But that wasn't happening. So I'm putting gopher baskets in on top of the wire and making it a permanent planting.

Which is rather odd for me in a way. I was trying to think "when have I ever planted a rose bush?". I don't think I have, except for the occasional transplant of a miniature rose that I received as a gift. I have always kept my roses in containers. Now, they're getting a permanent home, interspersed with a variety of herbs and flowering plants. Wonder what that will be like?
Here's a picture from the last of the side garden's "hayday" in 2008:

When this is done, I'd like to finish "the orchard". 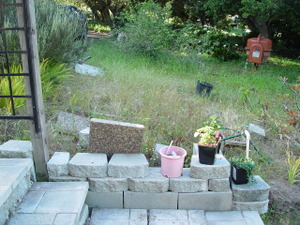 Posted by CoastalCAGardener at 7:20 PM 4 comments:

Last Sunday it finally warmed up enough to go outside and pot up all my little sprouts from my desk. I was so pleased with my work. I had dreams that my next photo would be of healthy little plants all ready to be set out in the garden.

Sadly, when I went out to the greenhouse to check up on them this morning, something had gone in and nipped of the heads of nearly every sprout. Looks like a mouse made a salad of my new plants. sigh..... Back to the sprouting pods.
Posted by CoastalCAGardener at 6:51 PM No comments:

This blogger has been busy with graduate studies and only posts irregularly. My apologies.

If you're wandering in my garden, please weed. I could use the help. ;-)

Topics in this blog (more coming)